You may have thought it had all gone quiet on the F.C. Top Knot front, in all honesty it had but I have been mad busy lately as I’ve been job hunting (good news is I’ve got a new job – which means I’ll be even busier soon when I have to worry about moving and “important” things like that) but it certainly had not been forgotten, so without further ado here is a brief review of the first half of the 2015/16 season.

After the highs of 2014/15 in which F.C. Top Knot did the double of Vanarama Conference South and F.A. Trophy Winners the pundits were asking how would the side cope with the step up in difficulty that promotion to the Vanarama Conference National would bring. Well the answer to that question is that they are handling the step up emphatically.

Top of the league from Bristol Rovers after the Christmas fixtures by 28 points and already a goal difference of 111 has seen the club smash records as if they were going out of fashion, F.C. Top Knot have already managed to break the record of most goals scored in a season before the New Year and Zlatan Ibrahimovic has won his personal accolade of being the first man to ever score 5 goals in a single Conference match.

Here is the table as it stands: 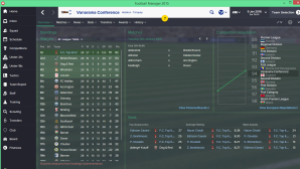 The 100% record was wiped up with a frustrating 0-0 draw against Eastleigh although there was some poetic justice as the next day Eastleigh got deducted 10 points for going into administration – that will teach you to mess with the juggernaut which is F.C. Top Knot.

Here is the offending game in question:

Unfortunately Edinson Cavani has been ruled out for 3-4 months but thankfully the goal scoring machine hasn’t been missed too much as Ibrahimovic has taken his place at the top of the 4-3-3 with Graham Zusi now taking the AMC role. If Zusi is unfit then Andy Carroll goes to the top of the formation and Zlatan reverts back to his newly found AMC position in which he seems to be flourishing in. But this has been offset by Dani Osvaldo has stepping up this season with a goal tally of 25 goals and has certainly done more than his fair share, here is a list of the goal tallies so far. 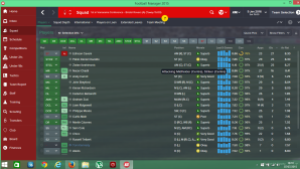 Again it doesn’t seem to be if F.C. Top Knot get promoted but more a case of when and the promised land of the Football League that certainly awaits, also can they repeat the double winning season of 2014/15 and secure the F.A. Trophy for the second year in a row. A difficult tie against 2nd in the league Bristol Rovers awaits in my next match, Rovers have pushed F.C. Top Knot the hardest so far this season with them going 2-0 up at home in the League only for F.C. Top Knot to dig deep and battle back to win the match 4-2.

Here is a full list of the results so far

In other random bits of news:

Ibrahimovic has now trained to become an AMC and weirdly Nacer Chadli has added the MR position to his repertoire.

Paul Jewell and Quinton Fortune have joined the coaching staff to add some backroom expertise to the club.

I’ve allowed first team squad players to go out on loan to keep them fresh but no one is leaving the club in terms of a transfer, this means I’m having to a) be diplomatic in team decisions so players don’t become unhappy but also b) rule with an iron fist when it comes to people wanting to leave the club.

Some of the youth regens have now signed professional contracts, now they may not have top knots but I will allow myself to integrate them into the team due to the fact that I’m not buying any players so this is the only way to keep the club going in the future years.

So the second half of the 2015/16 season awaits with the open top bus ready to be unveiled once the silverware is secured the only question is will it be 1 trophy or 2 (weirdly I wasn’t even in the F.A. Cup Qualifying Round which was a shame but probably did my a favour due to the potential fixture backlog) you’ll find out in my next F.C. Top Knot round up at the end of their season.

If anyone wants any screen shots of anything else in the game world then please let me know. Who can stop the Knot?

Like Loading...
Previous A Technical Question – can anyone help?
Next Sammy Amoebi moves to Cardiff in search of European Football