Breaking News
Home / Football / Liverpool looking to get a Benteke-away

Liverpool looking to get a Benteke-away 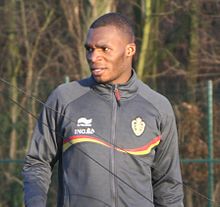 Where else but Anfield and the news that Liverpool have met the £32.5 million release fee for Aston Villa’s Christian Benteke. The Belgian international who was signed from Genk for only £7m back in 2012 still has to agree terms with Liverpool but it looks as if the Reds are set to spend a large chunk of the Raheem Sterling money on just the one signing. Maybe they’ve learned their lesson after the pretty wasteful return on the expenditure they made after selling Luis Suarez to Barcelona.

Is Benteke the right fit for Liverpool though. Last season he was primarily feeding off crosses from the Villa wide men (well certainly in the second half of the season, once Tim Sherwood came to the helm and actually got them playing something like an actual Football team) but Liverpool aren’t really renown for their crosses to the byline, they don’t seem to have the natural width needed for Benteke to use his aerial prowess. Does this mean Rodgers is also looking for another wide man to compliment Benteke’s key attributes. If not it could be a case of trying to fit a square peg in a round hole, talking of square pegs does this also mean the end of Mario Balotelli’s time on Merseyside?

Will this trigger Manchester United into making a bid of their own now that Liverpool have got the green light to talk to Benteke, also if (when) Benteke does leave Villa Park the question will be who will replace him?. The obvious candidate would be Emmanuel Adebayor, Tim Sherwood has already worked with him and actually managed to get him scoring goals. The only question would be will Aston Villa find his wages a bit prohibitive – maybe this is a move that Daniel Levy could be willing to part fund just to get Adebayor off the books. A scenario we’ve seen far too many times in the Togolese’s career.

Like Loading...
Previous Younes Kaboul set to be a Black Cat
Next Vidal So Soon to Bayern Move