So another completed season in the life of F.C. Top Knot and more silverware has been added to the trophy room. A prestigious double of winning the Vanarama Conference National and also retaining the F.A. Trophy means there were plenty of celebrations at The Top Knot Arena and now the promised land of the Football League awaits.

The juggernaut which was F.C. Top Knot took on all that went before and nearly went the whole season unbeaten, just like in the Conference South the season before the top knotted footballing lothario’s had little trouble in romping to the top of the league on the first day of the season and never leaving their perch thereafter. Unfortunately a magical 100% record evaded them again with a season record of W43 D2 L1. Thankfully the fans didn’t get too disheartened at the slight blip and still backed “The Knotters” in there 1000’s.

Here is a final look at the league table:

As you can see goals weren’t particularly hard to find this season as F.C. Top Knot scored an incredible 183 Goals in 46 league matches and only conceded 23 in the process, leaving the club with the most stupendous goal difference of +160.

Once again the holy trinity of Ibrahimovic, Osvaldo and Cavani run the league ragged with a staggering 111 league goals between them. Also taking into account that Cavani was out for 4 months in the tail end of the season, a special mention must go to Nacer Chadli who chipped in with over 20 goals this season and also secured himself a 5 year contract off the back of it.

Here’s a brief look at the some of the league stats:

And here is a look at everyone’s goal tally in all competitions:

As you can see Ibrahimovic was the absolute talisman this season with 50 goals in all competitions with him getting his 50th on the last day of the season. Edinson Cavani was on fire until his injury as his contribution was 35 goals in only 29 matches.

As for the results here is a full breakdown: 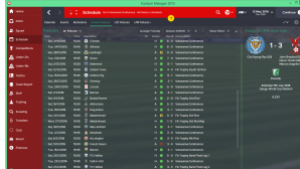 As for the defeat – it was a sensational 4-3 defeat away to Forest Green in which Liam Ridgwell got sent off and then I conceded two late injury time goals to consign the club to their first ever defeat, to be honest it was a massive shock, here is the offending game in detail: 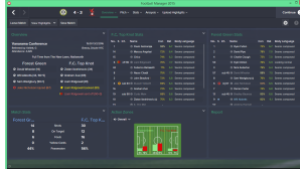 I also 30 shots on goal that night, but it really was just one of those nights. But on the other hand here is F.C. Top Knot winning the F.A. Trophy for a second season in a row: 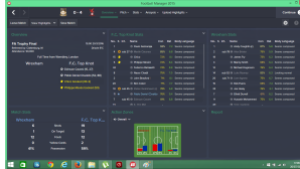 Thankfully I didn’t have the international date clash like last season and had a full strength side with a returning Edinson Cavani getting two goals after a long injury lay off in a 4-0 win over Wrexham.

At the time of going to press the manager of the season and player of the seasons awards haven’t been announced but I would be incredibly surprised if it wasn’t myself and Zlatan picking up the awards. If John Akinde of Barnet somehow wins the player of the season award then my laptop is going in the bin. I’ve also got a second wave of youngsters who have now joined the club with Sam Cole who scored on his debut in the F.A. Trophy Final last season being rewarded with a professional contract.

As for transfers well there has been no activity either in or not with only Sergio Torres being allowed out on loan, I’m ruling the regime with an iron fist as I can’t replace any of the players due to the transfer embargo I have placed on myself. The only potential signings could be if any other top knots get spotted next season then they could be added to the club ranks.

Another thing I’m going to have to worry about soon, is retirements on the horizon for players such as Mexes and Ibrahimovic, how many seasons can I get out of them as I try to make my way the Premier League. But first I have to worry about how F.C. Top Knot are going to be able to cope with the challenges of the Football League. There’s only way to find out and that’s by following the blog and the continual adventures of F.C. Top Knot.