Clive and Andy – A Love Story 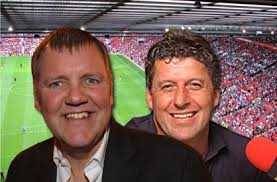 Now it would be easy to do a preview on tomorrow’s Champions League Final between Barcelona and Juventus but I guess any well read Football Fan has probably read all they can in regards to the build up of the game and now just wants the game to arrive. Therefore I thought it would be more fitting to preview something else.

That something else is the last weekend of the fearsome commentary duo of Clive Tyldesley and Andy Townsend. After nearly 15 years of striking fear into the British viewing audience it was announced in January that ITV wouldn’t be renewing Andy’s contract due to the losing of their F.A. Cup and European Football rights. To me it almost feels like a divorce, that horrible feeling one would have as an 8 year old when having to decide whether to live with Mum or Dad.

Like Andy Gray and Richard Keys, these two come as a pair – when Andy Gray tried his hand at a bit of co-commentary on BT Sport a couple of years ago you felt that with Richard Keys still sitting in exile in Qatar that something or someone was missing, it just didn’t feel quite right. This is exactly the feeling we’ll have when Clive still tries to do his best on ITV next season and Andy is peddling his co-commentary wares while going freelance on TV stations around the world.

When I’m watching England games next season who is going to tell me if England are playing “Better”, how will I know if someone has “hit that a little too well”, when will someone shoot “in around the goals”. As good as Lee Dixon is, I’ve almost and I say almost come to enjoy Clive and Andy’s repertoire now. It’s got to the point where it’s so bad it’s good, you know what you are going to get, it’s comforting on those Winter nights when England take on Lithunia in Villinus. After their partnership was much maligned over the years I’ve begun to grow some affection for the pair especially Andy, I guess you could say I’m suffering from Towns Syndrome

With Andy leaving us and breaking hearts across the country, let’s have a look at some of his best moments:

“Snakes on a plane, what’s all that about?” – Classic Andy

“In the end, Rosicky did initially well” – Start as you mean to go on Andy

“That’s what you want from your striker….Goals” – Andy is what I want from my analysis

Of course it’s not the phrases or quotes that Andy will ultimately be remembered for, of course it will be the “Tactics Truck” that featured on ITV’s horror show The Premiership. Annoyingly all footage of this has been removed from Youtube – I am absolutely sure ITV/Townsend have paid someone to remove the footage like someone who is trying to stop some dodgy pictures turning up on Google. My most striking memory of the “Tactics Truck” was on the first day of the season back in 2001, Arsenal had thumped Middlesbrough 4-0 at The Riverside Stadium. Ugo Ehiogu was lucky enough to be the first visitor to the truck unfortunately for Ugo he had been sent off in that very game . So Andy in his infinite wisdom decided the one part of the game they would review was Ugo’s aforementioned sending off, this created the wonderful scene of Andy joyfully playing with Tactics Truck gagdets while a stone faced Ugo Ehiogu had to watch countless replays of his Red Card. Unsurprisingly the truck was put out of service soon after.

With the Republic of Ireland playing England on Sunday Afternoon it almost feels a shame that Andy has to bow out on such a low note with a friendly that no one really cares about. The early kick off time of 1pm to a half empty Aviva Stadium is not the platform that Andy deserves to go out on, Andy really should be bowing out on the grandest stage of them all at the Champions League Final tomorrow in Berlin. But ever the professional Andy will be unashamedly shouting “get in” when ever Robbie Keane has a crack on goals (I hate the way he says Goals plural) but after 15 years service for ITV will give him that as Sunday will be his day, Townsend Day as it should be known as. Here’s hoping that ITV do some sort of montage of Andy at the end, lets hope it ends with a BANG

But what next for Clive I wonder. Will it be Clive and Lee as the new commentary duo for ITV, it just doesn’t feel right – a bit dirty almost, it’s as if Clive is your Mum and now she’s seeing a younger guy since her Divorce “Dan this is Lee, he likes Football too” “Fuck off he’s not my real Dad”. It’s heartbreaking to know that after 15 years together the partnership will come to an end, they don’t deserve this, more importantly we don’t deserve this but we will have to be strong and learn to move on. Andy will be fine no doubt, he’s a resilient man who will no doubt end up on Singapore TV telling us “that’s a bit Sloppy” and that “Iniesta can hurt you and Messi can hurt you” it may be a bit raw to hear him on a foreign TV station but it time this wound will heal and we can just learn to appreciate Andy’s talents all over again.

For years we bemoaned Clive and Andy they were the commentary couple you loved to hate but now they are coming to an end you don’t what you’ll miss until it’s gone. Will Andy end up sleeping rough in the Tactics Truck, will Clive end up moving in with another man, what’s the German for “Better Klaus” – we will find out over the next few months.

Andy Townsend thanks for the memories, we salute you!