Blatter, Platini and Valcke benched after given 90 day suspensions 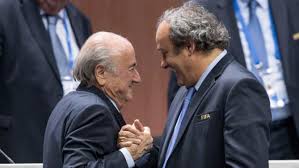 The punishments were handed out by the ethics committee of football’s world governing body.

Blatter, Valcke and Uefa president Platini are being investigated by the committee over corruption allegations.

“The grounds for these decisions are the investigations that are being carried out by the investigatory chamber of the ethics committee,” it said in a statement.

The three are banned from any football activity in the interim. They deny any wrongdoing.

Fifa’s ethics committee began its investigation into Blatter after the Swiss attorney general opened criminal proceedings against the 79-year-old.

He is accused of signing a contract “unfavourable” to Fifa and making a “disloyal payment” to Platini – who is also president of European football’s governing body, Uefa.

The ethics committee also opened an inquiry into Platini over the 2m euro (£1.35m) payment – which was made nine years after the 60-year-old carried out consultation work for Blatter.

Valcke was already on gardening leave from his Fifa post following newspaper allegations last month which implicated the 54-year-old in a scheme to profit from the sale of World Cup tickets.

Editor’s Note: Shit just got real…..really real. It’s probably worse news for Michel Platini as this suspension means that Platini now cannot run for President. Although Greg Dyke probably looks a bit silly after endorsing Platini as the next FIFA President, then again Greg Dyke always looks a bit silly to be honest. Currently Issa Hayatou of Cameroon is the temporary FIFA President but as to who will be the permanent successor to Blatter, well these suspensions have blown the race wide open.